When I was reading this interesting article I felt like I need to share it …. plus I need to remind that we belong on land. The ocean is their territory — and when we venture into their territory, you know, it’s at our own risk.

Achmat Hassiem is a 33-year-old South African swimmer who was injured in an attack by a great white shark. Despite the injury, he went on to compete in the Paralympic Games — and has become an advocate for shark conservation with the nickname “Sharkboy.” In this edited version of an interview with NBC News, Hassiem tells the tale of the attack and its aftermath.

This all happened in 2006 in Cape Town, on a beautiful beach called Muizenberg Beach. I actually live right on the beach, and I grew up next to the ocean and loving it.

On Aug. 13, 2006, I was involved in a routine lifesaving training exercise called “multiple patient rescues.” Basically, you have people who need rescuing in the water, and a rescue boat goes out to get them. On that day, it was myself, my brother and a friend named Nick. We played the part of the three “patients” in the water.

We were about 15 meters apart from each other. Nick was in the shallowest water, I was in the protective middle, and my brother was in the deepest part. When the whistle went off, the rescue boat got to Nick first, so I was supposed to be the next person they picked up, and then my brother.

I was busy looking out toward the ocean, and I was looking at my brother when something caught the corner of my eye, coming in from the right side. I glanced over, and that’s when I saw this massive fin, just riding on top of the water and moving toward my brother.

I looked at the fin, and I looked at my brother, and I looked to see where the lifeguards were. I tried to assess the situation. I started drumming my arms on top of the water to make a big splash and draw the shark’s attention away from my brother.

The lifeguards got to my brother, and I was left in the water with this 4.7-meter-long great white shark. I was looking around, trying to see where it was. I couldn’t see it — but then the shark suddenly pitched up just to my right.

It didn’t attack me. It just moved right up next to me, and I remember looking at the shark and seeing the sheer size of it, so close to my body that I could actually touch it and move myself along its body. The shark’s fin caught my leg. I actually spun against its body. My elbow caught the back of the shark’s tail, and that’s when the shark turned its massive body around and faced me.

At that point, human instinct just takes over, to try to get away from the shark.

I was trying to move away from the shark and at the same time do a bit of a funny backstroke. That’s when the shark lunged forward. I took my left hand and put it on the shark’s nose, and at that point the shark was kind of gnawing at me.

I remember seeing the splash of the tail in the background as the shark pushed itself forward, and I remember putting my hand on the shark’s head and just trying to move the shark’s body out of my way.

Well, the next thing I could do was to climb on top of the shark’s back. That’s the only thing I could think of at the time. I shoved my hip into the side of the shark’s head, and then I tried to swing my right leg over the shark’s body. But the leg didn’t want to come over. I was trying to figure out, “Why is this leg not coming over,” and at that point, I decided to turn around and see what had happened.

Half my leg was in the shark’s mouth already.

At that point, the shark shook me violently on top of the water, and I remember moving forward and back and just going crazy. I remember looking at the lifeguards and my brother, and screaming at my brother, “Don’t let me die!”

That’s when the shark pulled me under and dragged me for about 70 meters, toward Seal Island. We were moving at quite a speed. As I was moving toward the depths of the ocean, all I can remember is my body dangling along its body, and just picturing how unbelievably big this shark was.

I was fighting for my life underwater. I tried to hold my breath, but I had no more breath left because of the panic and the horror over what was happening. I was at the point where my lungs felt like they were on fire. What I told myself was, “You know what? I’m human, and we humans never give up, you know. We’ll fight till the bitter end.”

Then I thought, “I’m gonna go up against you, and I’ll see what I can do.” So I started hitting the shark on the side of its head with my hands as much as i could. To be honest, it was like hitting a tank covered in sandpaper. The skin of my knuckles just peeled off, like you were peeling a banana.

I took my left leg, which was my free leg, and I started kicking the shark in the side of its head to try and free my right leg. With every kick I gave, I could feel myself moving farther and farther away from the shark. It got to the point where the shark kind of bit me, but then it got caught around my shin bone, so with every kick I gave it was sliding down the shin bone.

Eventually the shark got to my ankle and it couldn’t slide anymore. I gave one final kick, and the shark shook me again, and I could hear this crackling sound. Boom! That’s when my shin bone broke into two pieces.

I needed to breathe, so I immediately swam for the surface. My brother and the lifeguards picked me up. As my brother was pulling me into the rubber boat, I remember him saying, “Achmat! Achmat! Watch out!”

My brother pulled me in and immediately dived on top of me. That’s when the shark came at us for the second time. It actually had enough momentum to launch itself out of the water. It hit the boat with so much force that we spun around, and the boat was now facing the shoreline.

While my brother was lying on top of me, he took one hand and closed my eyes, and used his hand as a tourniquet, grabbing what was left of my leg. The next thing I knew, we were moving toward the shoreline in the rescue boat.

I remember asking my brother, “How bad is my injury?” He said, “Don’t worry, you’ve just got a little cut on your foot.” Meanwhile, the entire half of my shin was bitten off. I think it’s just a way for the lifeguards to keep you calm in a heavy situation, and it works.

When we got back to the beach, my instructor was standing there with a shark attack pack. He called the paramedics, and then I was flown to Constantiaberg Hospital. I couldn’t see my injury. My brother kept my eyes closed the entire time.

Did you feel any pain? There was no pain whatsoever. I couldn’t feel anything, even during the attack. I’m guessing that the adrenaline kind of took over. I woke up in the intensive care unit with my brother standing next to me, and he was crying. He said, “I cannot thank you enough for saving my life. I know what you did.”

He said, “Have a look underneath the blanket.” That’s when I lifted up the covers and saw that half my leg was missing.

After this traumatic experience with a shark, why did you decide to become an advocate for sharks?Well, I was approached by the Pew Charitable Trusts, for their global shark conservation campaign, and I was basically asked, “Would you like to be part of the team?” 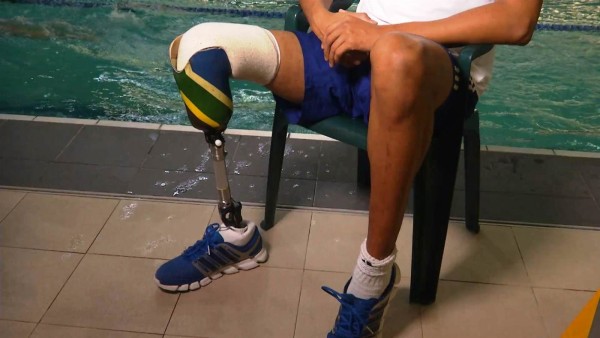 The shark is an absolute beautiful creature, but a hundred million sharks are being killed every year. I’d like our kids to be able to grow up and see this creature on television, or in real life. The last thing you’d want to do is have the shark be like a dinosaur.

Sharks are being killed for their fins, and they’re deteriorating at a rapid rate around the world. To see what people do to them just to make a bowl of soup … just to see this is very inhumane. I thought, you know, someone needs to speak up for these sharks.

That’s why I’ve come to be more than just a shark advocate, but a shark spokesperson.